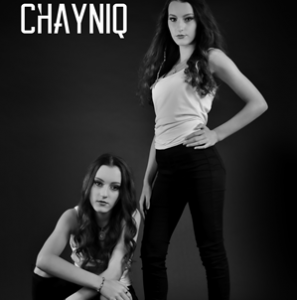 From an early age they have dedicated their lives to music and dance.When the girls were only 9 years old they featured in Scotland's leading newspapers with the spotlight on them as they appeared alongside the stars of the West End. The following years saw them take on the biggest RnB and Hip-Hop tracks in Scotland's top venues

Their passion for music began to flourish through the influence of artists such as Jason Derulo, Rhianna, Beyonce and Chris Brown to name but a few. 2012 saw the girls music career kick off under the tuition of Louise and Des McFarlane with performances at Music Festivals, Variety Events and Charity Gigs. This lead to them becoming more in demand for productions and events.

Their dedication paid off when their unique talent was discovered in 2014 by Award Winning Video Producer Etienne Kubwabo, CEO at Cre8tive Entertainment/TV. Their team started to create Chayniq, working with them in the recording studio, producing music videos, photo shoots and introducing Chayniq to Scotland's most talented producers. In June 2014 the girls commenced writing and recording their first original track produced by Cre8tive Entertainment's DMTbeats.

Scotland's newest discovery Chayniq are a face to watch out for in the music industry.

There are no posts to display. Try using the search.